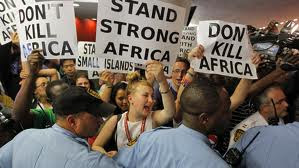 Nothing could have been as disastrous as a failed climate negotiation - a possible outcome the world barely brushed past at Durban, last week.

The multiple challenges of bridging the gap between the developed and developing nations, infusing life into the Kyoto Protocol and activating the Green Climate Fund seem to have been met with some success.

With low-key expectations from COP17, dampened by the ongoing economic crisis, failed political leadership and slagging financial commitments, it can be said that the Durban climate talks have achieved a significant milestone.


The debate over whether big emitters, like India and China, from the 'developing bloc' should be part of a legally binding emissions reduction exercise can now be put to rest. The ball is in everybody's court now. The deal, a last-minute agreement on a new text (see full text below) known as the Durban Platform for enhanced action, has been successful to the extent that it involves the top polluters. All 195 parties have agreed to draw up a legal framework by 2015 for climate action with a commitment to accept binding emission cuts by 2020.

More importantly, this must also clear the air over the participation of the Unites States. If this deal has to become effective, the US can no longer abstain itself from legally binding provisions the new agreement purports to put in place.

Durban might have set the right environment for a much needed meaningful progress. However, the challenge still exists. Will the Durban agreement translate into action that would match the science behind the climate change phenomena is a question that everybody is asking. There needs to an assessment of "ambition gap" between countries current emission reduction pledges for 2020 and the goal of keeping global warming below 2°C.

A post-Durban fast-track approach can help reduce greenhouse gas emissions by increased emission cuts by the developed world and an increased  commitment by the developing countries to switch to a low-carbon economy catalyzed by the Green Climate Fund.


But how fast would this happen remains to be seen. Though long term goals have been attained at Durban, the agreement does not throw light on some important pressing issues.


First, the final text does not distinguish between big and small historic polluters - which means that future climate actions would entail equal responsibility from both rich and poor countries.

Second, it does not speak of differential approach needed to deal with countries with high and low per-capita emissions.

These two issues might be irrelevant from a climate science perspective (that is concerned with absolute carbon emissions and is not constrained by national boundaries). However, from a development perspective these are highly relevant for national economic interests

Third, the timeline for putting in force the all-binding agreement has been set to 2020 - which gives a much longer time for the United States, the biggest historical polluter, to keep away from mandatory emission cuts. The continued absence of the US had rendered Kyoto Protocol only partially effective and casts doubts on the effectiveness of climate action during the period 2012-2020.

Fourth, poor and vulnerable nations that are facing the brunt of climate change need immediate intervention. However, the Durban agreement does not come out clearly on what action would be taken to address such pressing issues.

Though solutions need to be drawn on evidence provided by climate science but equity and fairness in implementation would be vital in maintaining the delicate balance between developed and the poor nations.

Going by the above, it can be said that the coming years, especially 2012, would be crucial. Though the extension of Kyoto Protocol and renewed commitment on the Green Climate Fund are vital, more has to come in terms of concrete action on emissions reduction during 2012-2020.

The window of opportunity is closing fast and Durban has just promised hope.